How do I write one to many query in Dapper.Net?

I've written this code to project one to many relation but it's not working:

Can anybody spot the mistake?

These are my entities:

I change the query to:

and I get rid of exceptions! However, Employees are not mapped at all. I am still not sure what problem it had with IEnumerable<Employee> in first query.

This post shows how to query a highly normalised SQL database, and map the result into a set of highly nested C# POCO objects.

The insight that allowed me to solve this problem is to separate the MicroORM from mapping the result back to the POCO Entities. Thus, we use two separate libraries:

Essentially, we use Dapper to query the database, then use Slapper.Automapper to map the result straight into our POCOs.

In my tests, Slapper.Automapper added a small overhead to the results returned by Dapper, which meant that it was still 10x faster than Entity Framework, and the combination is still pretty darn close to the theoretical maximum speed SQL + C# is capable of.

In most practical cases, most of the overhead would be in a less-than-optimum SQL query, and not with some mapping of the results on the C# side.

In this example, we have list of Contacts, and each Contact can have one or more phone numbers.

Note that this table has a foreign key ContactID which refers to the TestContact table (this corresponds to the List<TestPhone> in the POCO above). 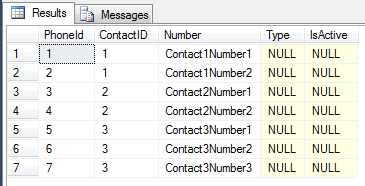 In our SQL query, we use as many JOIN statements as we need to get all of the data we need, in a flat, denormalized form. Yes, this might produce duplicates in the output, but these duplicates will be eliminated automatically when we use Slapper.Automapper to automatically map the result of this query straight into our POCO object map.

Looking in Visual Studio, We can see that Slapper.Automapper has properly populated our POCO Entities, i.e. we have a List<TestContact>, and each TestContact has a List<TestPhone>.

Both Dapper and Slapper.Automapper cache everything internally for speed. If you run into memory issues (very unlikely), ensure that you occasionally clear the cache for both of them.

Ensure that you name the columns coming back, using the underscore (_) notation to give Slapper.Automapper clues on how to map the result into the POCO Entities.

Ensure that you give Slapper.Automapper clues on the primary key for each POCO Entity (see the lines Slapper.AutoMapper.Configuration.AddIdentifiers). You can also use Attributes on the POCO for this. If you skip this step, then it could go wrong (in theory), as Slapper.Automapper would not know how to do the mapping properly.

Successfully applied this technique to a huge production database with over 40 normalized tables. It worked perfectly to map an advanced SQL query with over 16 inner join and left join into the proper POCO hierarchy (with 4 levels of nesting). The queries are blindingly fast, almost as fast as hand coding it in ADO.NET (it was typically 52 milliseconds for the query, and 50 milliseconds for the mapping from the flat result into the POCO hierarchy). This is really nothing revolutionary, but it sure beats Entity Framework for speed and ease of use, especially if all we are doing is running queries.

Code has been running flawlessly in production for 9 months. The latest version of Slapper.Automapper has all of the changes that I applied to fix the issue related to nulls being returned in the SQL query.

Code has been running flawlessly in production for 21 months, and has handled continuous queries from hundreds of users in a FTSE 250 company.

I wanted to keep it as simple as possible, my solution:

I still do one call to the database, and while i now execute 2 queries instead of one, the second query is using a INNER join instead of a less optimal LEFT join.